As I was digging through my older pictures for a project, I came across some taken at the Norton Simon Museum, featuring bronze statuettes of Edgar Degas, who was better known for his paintings of ballerinas. It was at Norton Simon that I first learnt of Degas as a sculptor. Apparently, I am not the only one who only knew Degas as a painter, so I decided to do a bit of (non-scholarly) research on the Internet.

One of the most captivating pieces is named “Little Dancer, Aged Fourteen.” It turns out that there are a total of 28 (!) casts of this “Little Dancer” in museums and galleries worldwide, and possibly a few more in private collection. 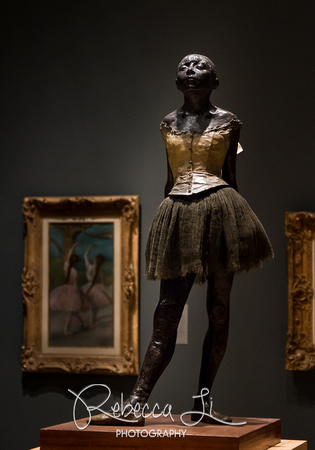 It would appear that Degas was a mass manufacturer, but that was not the case. After a long career in painting and drawing, Degas began to teach himself sculpture in the late 1870s. He considered himself a realist although he was very much part of Impressionism. He studied the human body and embraced it in his artwork. The “Little Dancer” was born out of his fascination with ballerinas and was a controversial piece depicting the working class of poor, indecent women. In Victorian times, dancing was not a well-respected career. Ballerinas were “women of the night” -- women who were willing to show off their bodies in tight-fitting costumes for money. Many also became mistresses of wealthy men.

The model for this “Little Dancer” is believed to be Marie Geneviève van Goethem, who was born into a poor Belgian family. She was a student at the Ballet de l’Opera (Paris Opera Ballet School) and first modeled for Degas at the age of 11, probably for extra money. The statuette above was from the time she posed at 14 when she did so both in the nude and in a ballet costume. Although Marie was since immortalized in Degas’s drawings and sculptures, little else was known except that she was dismissed from Paris Opera, either from being late to rehearsals or from missing too many classes. Some believed that Marie’s mother was prostituting her daughters to the Opera’s regular visitors, and Marie might have become a prostitute full-time after being fired at 17. No marriage or death record was found; Marie probably died in poverty and was buried in an unmarked grave.

The original “Little Dancer” sculpture Degas made was in fragile pigmented beeswax, clay and plastiline. It was said to wear real human hair (wig), tied back with a silk and linen ribbon bow, dressed in a silk bodice and a gauze tutu, fitted with fabric slippers, and placed on a wooden base. The tights on her legs were lumpy, showing poor quality or poor fit. As Marie was still training to be a ballerina, she was depicted in a moment in a routine practice instead of performing on stage. She stood in the fourth position with arms stretched back uncomfortably, head and chin held as far back as humanly possible; the unnatural, awkward pose showed utmost determination and forced confidence of a teenager trying her best to get herself out of poverty.

The multiple bronze casts were not made until Degas’s death in 1917. More than 150 figure studies were found in his studio, and many were already deteriorating, as Degas had not favored reproducing his sculptures in more permanent materials. His heirs commissioned sculptor Paul-Albert Bartholomé, Degas's longtime friend, and the distinguished Paris foundry A.-A. Hébrard et Cie to cast copies in bronze to preserve the compositions and to sell them as finished artwork. For “Little Dancer”, the bronze statuettes were partially tinted and then dressed in cotton skirts and satin hair ribbons.

This “Little Dancer” would stand out in art history and Degas’s career over the rest of his work: the wax original, now in National Gallery of Art in Washington D.C., is the first and only sculpture Degas ever exhibited in public during his lifetime. Called “La Petite Danseuse de Quatorze Ans” when it was first exhibited in Paris at the Sixth Impressionist Exhibition of 1881, it was not as warmly received as it is today. Although many critics proclaimed it a true masterpiece of modern art with incredible realism, the majority considered it “ugly”, “simply hideous”. Apart from the unwelcomed representation of the working class, the dancer’s face attracted intense criticism and wild, controversial speculations. The dancer was described as looking like a monkey; many even speculated that Degas was making a statement about dancers being criminals! The claim was based on the popular “scientific” study of phrenology at the time: the relatively big skull and other prominent facial features Degas gave the “Little Dancer” suggested a character of wrongdoings. In the end, the wax figure was not sold and thus remained in Degas’s studio until his death.

Close-up and Back of "Little Dancer, Aged Fourteen" at the Norton Simon Museum

What a story behind just one little dancer! I wonder if Degas may be turning in his grave for his family casting so many copies of his wax statuette into bronze. He may be even more horrified to learn that everyone can now own a piece of his work, from posters, postcards to small replicas, t-shirts, and mobile phone cases! On the other hand, he may be glad to know that ballet dancing is now perceived in more positive lights. He may or may not like that we can now “visit” his dancers from our computers in the comfort of our homes without even setting foot in any museums. Despite the many benefits and perils of technology, I am grateful to gain new insights on a piece that I already found inspiring in the first place. Perhaps one day I would create a significant “Little Dancer” of my own!

P.S. By coincidence, I found out that the Norton Simon Museum is hosting an exhibition titled "Taking Shape: Degas as Sculptor" until April 9, 2018. Time to pay a visit, anyone?