After writing my last blog on Edgar Degas’s Little Dancer statue, I just couldn’t put her out of my mind. So, I decided to pay her a little visit at the Norton Simon Museum in Pasadena, especially since there was a special Degas exhibition that was to end soon. (Ended as of April 9)

Degas's statuettes are already well known and usually on prominent display at Norton Simon. What was special this time was that they were showcased in much closer proximity with the artists’ famed paintings and drawings. Together with an informative guided tour, the exhibition provided a wonderful opportunity to learn of the artist’s interests and work processes. The theme “taking shape” refers to both Degas’s own development as well as his role in the history of modern art.

I am no art history buff, but I can't help sharing the interesting "facts" that I *think* I learned. Beware, I have not done any fact check!

Despite his training in classical art techniques, Degas was quite forward in his times, in mixing media and exploring non-traditional, daily facets of life. Do you see how the sculptures, drawings, and paintings go hand in hand? 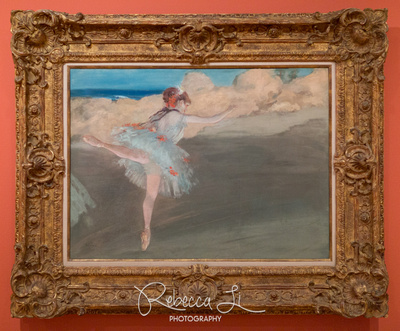 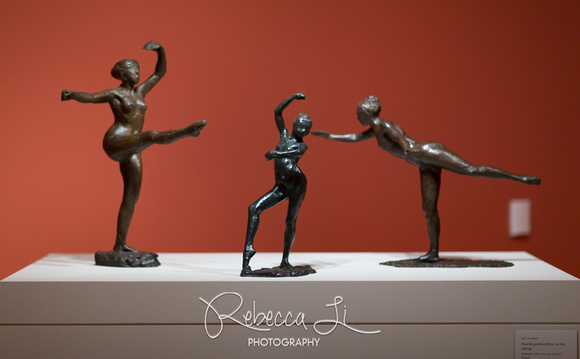 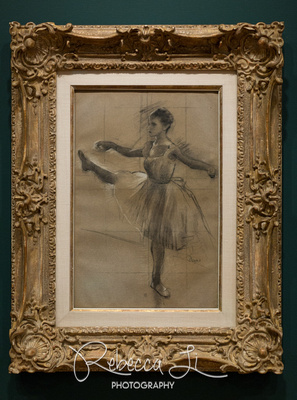 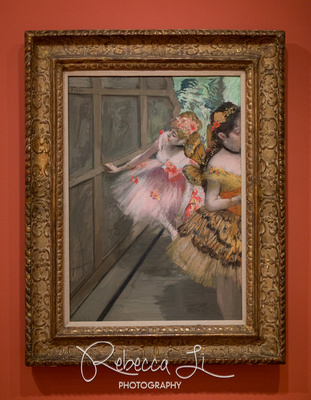 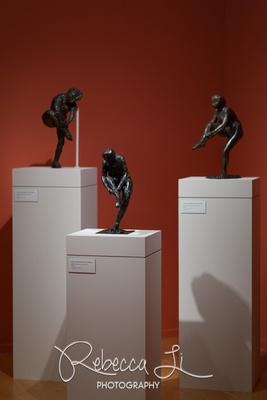 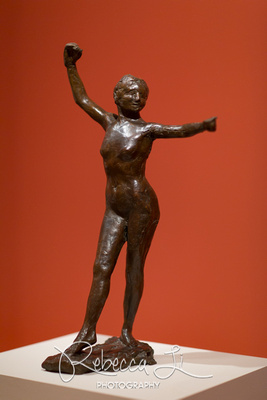 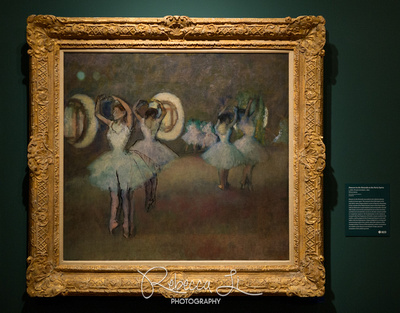 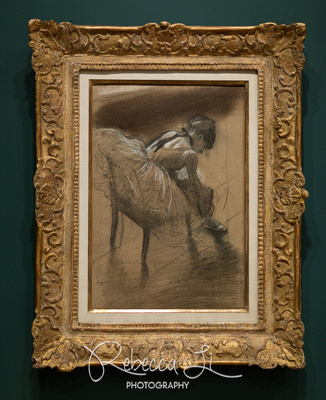 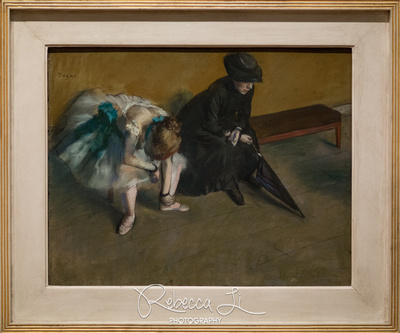 Most people would know Degas as a painter, as he only showed one sculpture - the original "Little Dancer, Aged Fourteen" - in public in his life time. (and he managed to stir up a major controversy in the art world!) However, it was not a secret that he sculpted: apparently, his families and friends who frequented his studio would see his sculpture projects on prominent display!

Sculpture is really an integrated part of Degas's creative process. He studied his subject well before making his final artwork. Most of the statues Degas made are nudes. That reminds me of Michelangelo's unconventional practice to study the human body. Realistic depiction was one characteristics of the Renaissance.

Although bronzes were popular and relatively affordable n Paris at the time, Degas made his statues in beeswax and clay. He was known to think that the more transient materials carried less expectations and responsibilities as "experiments", and it was his preferred way to study shapes and forms of his subjects.

It has been over a century since the artist's death in 1917. Majority of the original statues in beeswax and clay did not survive the test of time. Degas's heirs, prompted by right intentions or not, commissioned bronzes cast from whatever they could salvage in Degas's studio. The result is multiple copies of Degas's priceless statuettes on exhibit in top museums around the world. The set of "modèles" at the Norton Simon Museum is of significance over the other bronzes at other venues: it is the first (and of course, only) collection of bronzes cast from the original wax and plaster statuettes. It uniquely shows the handiwork of the artist, as subsequent serial casts were made from this set, and in most cases, "fixes" were made that were not part of the wax originals.

Marie van Goethem, from a poor Belgian family living in Paris, was the model for his famous “La Petite Danseuse de Quatorze Ans,” shown at the at the Sixth Impressionist Exhibition of 1881. (Learn more from my last blog.)

I think the statuettes pictured below have been permanently on view at the museum, but this is the first time I realize that they are related.

By the way, the tour guide remarked that it is a very sloppy fourth position Marie is immortalized in. I guess I am now more in sync with Degas's claiming to be a "realist" at Impressionist times. 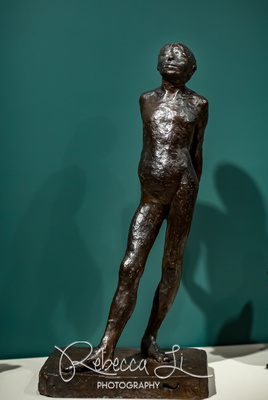 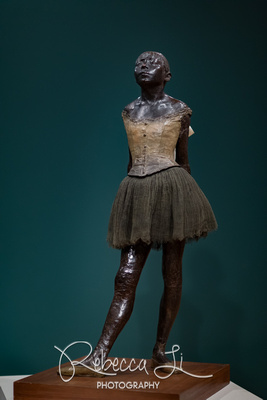 In addition to dancers, Degas's favorite subjects included horses and bathers. I have yet to fall in love with the horses. His obsession with bathers was a little more interesting. There were also many beautiful sketches, paintings, and sculptures on the subject at the museum. Two pieces caught my eye.

"The Tub". Careful planning. Incredible attention to details. (Look at the placement of the right foot on the tub!) Creative use of materials (the original had white, murky "water" from a thin piece of plaster, and coated rag as "towel" at the base of the tub) 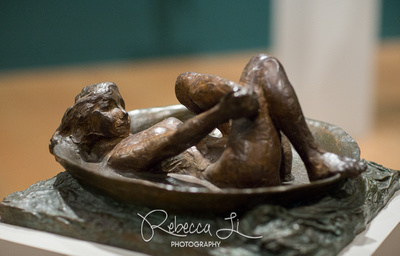 "Woman Drying Herself after the Bath". The lighting wasn't ideal, so I didn't take a picture of the painting. Click here for the image. It is said to be Degas's first experiments in monotype -- drawing on copper plates in hopes to make multiple copies. Degas very much painted over the blacks with pastels, with only small parts of the ink visible. This piece is also special because it was once owned by Claude Monet!!

With leaps in information, internet, and mobile technologies the last few decades, it is easy to forget that the 19th century was not too shabby at all either. After all, it was 500 years after Marco Polo accomplished his transcontinental Silk Road journeys, and at least 300 years since explorers started sailing around the world. International travel brought foreign trade and exchange of ideas.

Degas's adoption of fan motif and Spanish dance poses clearly reflected the foreign influence on western art. In fact, the 1879 Indépendents exhibition had a room dedicated entirely to fans. Degas and many other Impressionist painters put their own spins to capitalize on the latest fad to make more sales. 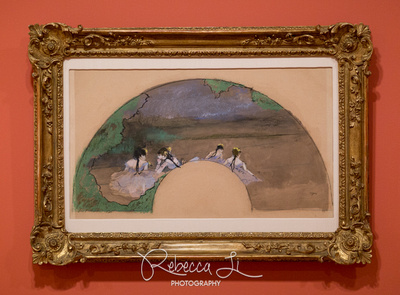 The most fascinating tidbit I learnt about Degas was how he expanded his paintings... physically!

I learnt much more than expected about Edgar Degas, his life, his work, and, in particular, his relentless study of his subjects in preparation for his ultimate masterpieces. Given Norton Simon’s large collection of Degas’s work, I wish the museum would have a room dedicated to the artist, just like this exhibition. I look forward to visiting the museum again soon to get more inspirations!

P.S. I found out that Degas was a photographer too. He took pictures of friends, family, and models, and even selfies! It'd be interesting to add his photographs in the examination of his paintings and sculptures.

Note: The artwork shown are properties of Norton Simon Art Foundation, and the images taken are not intended for reproduction. You can find more information about each piece on the museum’s website.