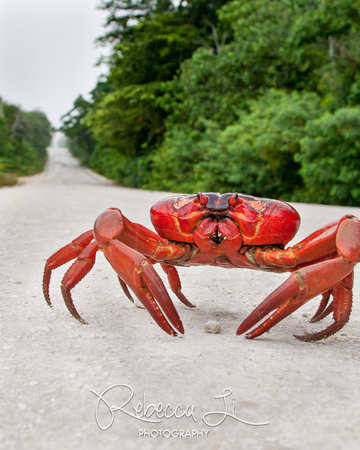 Christmas Island, Indian Ocean, Australia. Not to be confused with Easter Island or Kiritimati of the Kiribati in the middle of the Pacific Ocean. Far away from other land masses and uninhabited until the late 19th century, the island is home to many species that had evolved without human interference. Due to its unique, endemic flora and fauna, two-thirds of the island has been declared a National Park. There are steep fines for violations, so most residents and visitors alike stay clear of breaking any rules or doing anything harmful on purpose. As a result, the environment remains relatively pristine (minus the excessive phosphate mining and some WWII damages); the island is popular among bird-watching enthusiasts, scuba divers, and nature lovers in general.

While the endemic species are all interesting (I bet Charles Darwin wished to have studied this island in addition to the Galapagos), the most spectacular event takes place October - December every year (sometimes into January): the red crab migration. The Christmas Island red crab (in the picture) is a land species, but the crabs need the moisture during breeding and spawning. So, when the rainy season starts, the papa-crabs-to-be lead the way from inland towards the coast, followed by mama-crabs-to-be. The red wave begins, covering every inch they can conquer. After spawning, if not drowned by getting too close to the water, the adults return inland as another wave of the red sea. Then, hopefully, baby larvae survive their adventures out in the sea and the resulting little crabs create yet another red wave and join their parents inland. The little ones could return safely only if they were not eaten by whale sharks, manta rays, and other plankton-eaters, or trapped in caves and similar situations. During those crazy months, the human residents have to build special fences, blocks, and bridges for these crabs so that the roads will be clear for human activities and minimize any killing of these crustacean natives. Yes, the crabs have the right of way! :)

My friends and I visited the island in January/February 2009, and it was too late for the migration. However, there was no shortage of opportunities to see these red "devils"; I saw a horned, black head that could easily be Darth Vader on every single one of them! The crabs supposedly lived in the shades inland, but they were practically everywhere away from the sea. In addition, we saw an abundance of coconut crabs, red-footed boobies, brown boobies, and great frigatebirds. Oh, I almost forgot to mention the untouched coral reefs and hybrid fishes that we enjoyed on our scuba diving excursions. I didn't have much to show because my underwater housing broke as I was packing my luggage, literally three hours before my plane's departure. C'est la vie.

The unexpected part of the trip was learning about the people and the history of the island. Currently, Christmas Island is Australian territory, and its population is only 1500-2000, of which 65% is Chinese and 20% Malay. I didn't know this until right before I left for the trip. On arrival, we easily found "the" Chinese restaurant and made friends with the head of Chinese community, who invited my friends and me to sing Karaoke with the locals, all eager to show off their mastery of the oldies from the 70s. We also met the owners of supermarkets, inns, and dive shops who were very friendly non-Chinese. As far as I know, no one is native to the island, as child birth is prohibited in the local hospital because there is no insurance coverage. All expecting families are flown back to the mainland (e.g. Perth) for the baby to be born. Everyone I have met had their own stories of how they had come to live on the island. The ethnicity groups did tend to stick together, but almost everyone knew everyone else from work or other social occasions.

If I remember correctly, 400-500 of the residents were actually children, who all went to the same school. Contract jobs were paid handsomely, and most included family benefits that induced young professionals to come and start families while working on projects. On the other hand, the older Chinese locals told us that their children attended universities in mainland and stayed there for better job prospects. The non-seasonal locals usually held several jobs; after all, there were only 1000 adults, and every function of society needed to be filled. The most intriguing person we met at the time worked in both customs and baggage claim at the airport, sea rescue, boat rental, recreational fishing, and car/boat dealership, and probably more. That was seven years ago, and the locals were excited to upgrade their businesses to handle the influx of visitors expected December that year, when a cruise ship was to make its stopover on the island for the first time.

There was so much more to tell, like there were more Chinese temples than churches, or that expect everything to be frozen and beyond its expiry date as shipments were irregular and unpredictable, or that it's one of the few places that allow food in your luggage. Of course, history was interesting and played a big part in shaping the island. It was annexed by the British Crown in 1888 after the discovery of rich phosphate mines and was ruled by the Crown Colony of Singapore for a while. It was a target for Japanese occupation during World War II for the same reason. At the end, with independence of Singapore, etc etc, U.K. transferred the sovereignty to Australia after paying considerable compensation to Singapore. The mining business had dwindled, but tourism made up for part of the loss. Many residents were descendants of the indentured workers from Singapore, China, and Malaya from 1890s to early 1900s. The older generations were quite "endemic" themselves and preferred to stay put and live peaceful lives. The island had also seen its fair share of asylum seekers; today, it is still home to several immigration detention centers. While the centers are quite separate from the day-to-day lives of the islanders, they are quite a headache for the Australian government.

Well, I don't mean to write a Wikipedia page for the island, so I am going to stop here. If you are intrigued, you should plan a trip and see for yourself! Better yet, contact me and perhaps I could arrange a photography / scuba diving tour!