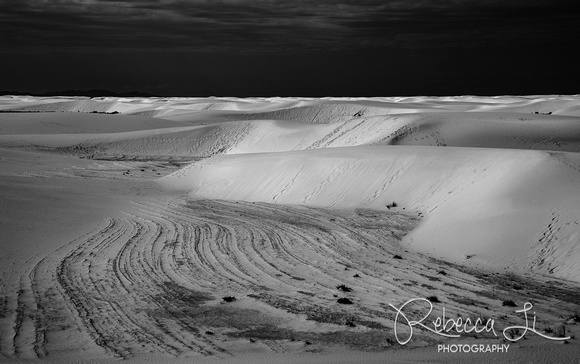 White Sands National Monument in New Mexico is the largest gypsum dune fields in the world. Its geology is analog to that of Mars. The site is biologically rich and diverse, with endemic species of animals which evolved over eons with limited impact from agriculture, grazing, and military use. With enormous potential for scientific research into evolution, it has been placed on the tentative list of UNESCO World Heritage Sites along with many of the national natural wonders in the U.S., but the nomination faces domestic political opposition, as some politicians believe that once the site is named a world heritage site, the nearby military operations will face international pressure to close down.

I have heard that a few tours for foreign visitors do stop over for sightseeing. On the day of my visit, it was far from being crowded, compared to the more popular national parks. Do remember to bring your passport, as the site is near the Mexican border and some military operations. Also, strangely enough, my camera and my friend's started to malfunction after our visit. The repairman said it wasn't sand but a mechanical failure. Anyway, let me warn you beforehand in case there were some unseen, less documented forces at work...

This is the last day of my 7-day nature photo challenge. Hope you have enjoyed my customized tour for you around the world!